Overcoming Obstacles, One Step at a Time

As with most cases in life, completing milestones seem daunting and nearly unattainable at first. From transitioning to a new job you aren’t totally qualified for, to the first big purchase as an adult or being a parent for the first time. There are endless applicable scenarios. On September 10, 2018, my task was to complete 100 holes of golf (walking) in one day.

What led me to attempt this journey? At age 10, I took up the game thanks to my father who taught me everything I know. Having looped countless times together, our stretch on the course has unfortunately come to an end due to physical limitations. Do I miss it – of course. But did I cherish every second – absolutely. Thanks to him (and my mom!), I have a deep-rooted passion for golf and passed along what I’ve gained onto my children.

For the third year in a row, a non-profit organization – Youth on Course (YOC) – has challenged individuals nationwide to take a pledge and join this hike; with all fundraising proceeds benefiting young golfers. YOC’s mission is simple and easy to get behind – make access to golf more affordable and allow any junior to play for no more than $5 per round. Golf opens doors, and this sport (or any) should remove financial barriers which may limit certain individuals from pursing and/or becoming active participants.

Alongside my colleagues Glenn Gray and Ryan Parsons, we were committed to join this cause.

Leading up to this day, I researched and mapped out my plan of attack. From nutrition to pace of play and golf club selection, no leaf was left unturned.

I was prepared: with awesome guidance from my wife, I packed three meals, a variety of snacks and the all-important bottle of Advil. For golf equipment – a Sunday bag with seven clubs (4 woods, 4, 6, 8, PW, SW and putter) and 10 balls. Apparel – three pairs of socks/shoes, shirts and shorts. Key for me was to remain comfortable.

Thanks to generous partners, arrived at Langston Golf Course at 6:00 a.m. on a muggy Monday. It had been raining for the past seven days, and the forecast called for more. With it still being dark out, couldn’t tee off just yet. Left things organized in my car for the upcoming pit stops, took four balls and waited for sunrise.

And So, It Begins

At 6:42 a.m., I stuck a tee in the ground and began my journey. A terrible drive led to a bogey, but finished hole 1. 99 to go! Five and a half rounds left to play. While the three of us began together, I made the decision to branch out and become a lone wolf.  Based on previous calculations, I had to finish each round less than 2 hours 30 minutes to beat the sunlight. By around 7:30 p.m., it’s dark.

By hole three, my first set of shoes were soaking wet. Even though the course has good drainage, standing water was everywhere. Made my way to hole nine in about 45 minutes. The front and back nine are about half a mile away, so I called the pro shop asking if they’d be willing to drive me out to 10 tee. A gentleman, Rodney, graciously agreed. When I mentioned the task at hand for the day, turned to me and said: “Boy, you crazy. No way.” By the end of the day, Rodney and I became best friends, and he acted as my cheerleader.

The first 18 had come and gone, and I’d found my rhythm. Finishing at 8:35 a.m., I was exceeding my pace, which was great. Going straight from 18 green to one tee box, I was completely focused and heavy into reflection mode. 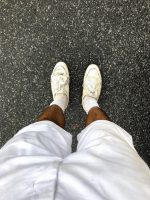 During my packing the night before, I decided the first pair of shoes I’d wear were my father’s old golf shoes. I’d never tried them on before arriving at the course, so if they were too big/small, I was in big trouble. Although they hadn’t been worn in quite some time, felt snug and fit perfectly. For 42 holes, was privileged to literally walking in the footsteps of the person I admire most. Alongside an amazing wife, he raised eight wonderful kids and 25 grandchildren. They are the most selfless people I know – continually donating their time and money to help those in need.

I’d completed two-and-a-half rounds and decided to pull into the pits for a quick stop. It was 11:10 a.m. Went to my car to change tires (socks, shoes, shirt), grabbed my pre-packed meal, two trusty Advil and walked over to the pro shop looking for Rodney.

Looking at him, said: “I’m gonna do this. Gotta keep it up and will reach my goal.” 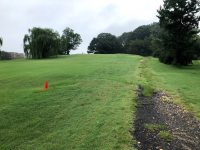 If any hole was poised to break me, it was the par 5 3rd. A challenging tee shot, followed by a second over water was topped off by a steep incline. 125 yards and what seemed to be a 60 degree incline later, you make it to the green. (This picture doesn’t do it justice).

As I began the third round, rain began to fall. Not only that, but physically I began to feel it. I’d thought a fresh pair of socks/shoes would reenergize me, but I was wrong. My mind began to wander, too, which was most concerning. Had to refocus, telling myself to take it nine holes at a time. Easier said than done.

The third round had come and gone, and I could finally see the light at the end of the tunnel. Being long-gone from my two other hikers, I saw them again. It was great. Gave each other a big thumbs up and “way to go.” Told them to beware because I was going to catch up and lap them before the day was over!

Rounds four and five were my favorite. Although I remained focused and maintained a good pace, was soaking it all in because, barring the unforeseen, I was going to make it. Shooting eight over, it was a real blast. My legs were absolutely shot, but nothing was going to stop me.

There were several players on the course, and as they let me play through we chatted for a few seconds. It was refreshing. At hole 15 of the fifth round, I caught up to my fellow 100 hole hikers! After sharing our aches and pains, we each kept trucking along. 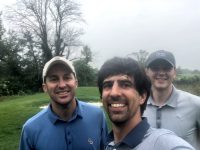 Finished my fifth round and eagerly went to find Rodney for that final drive together. Walked up to the shop and asked for him. A colleague told me he’d gone home for the day. Having arrived with us at 6:00 a.m. and now being 4:03 p.m., his shift was over. Felt a bit of sadness because I wanted to share our victory together.

After completing those extra 99 holes, I waited on the bench and began stretching. Although holes two through 99 were done alone, wanted to make sure Glenn, Ryan and I all finished together. Start the same way we began; all for one and one for all. 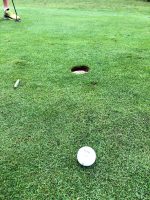 I did it for the kids. Youth on Course is an amazing organization.

I did it for my parents, siblings and nephews, who donated to my cause.

I did it for my wife and three kids, who are the cornerstone of my life.

I did it for my coworkers present and at work, making sure they knew we are all in this together.

I did it for my faith, because it was the most spiritual thing I’d ever done.

I did it for myself, proving I can do anything I put my mind to.

I did it for you, demonstrating that it’s ok to dream big. Hefty milestones can seem daunting at first, but don’t let Rodney (or anybody) tell you, “No way.”

Rest, more Advil and preparations for 2019. Can’t wait to do it all over again.

P.S.: wonder what those numbers were up top?

Buffalo.Agency at the Masters Tournament, Part One